From the Reader’s Digest:

Every year, the organizers of the Bulwer-Lytton prize based at San Jose University, California, invite entrants from around the world to come up with terrible opening sentences to imaginary novels. Here are some of this year's best efforts:

Danny, the little Grizzly cub, frolicked in the tall grass on this sunny Spring morning, his mother keeping a watchful eye as she chewed on a piece of a hiker they had encountered the day before.

And this year's winner: Gerald began--but was interrupted by a piercing whistle which cost him ten percent of his hearing permanently, as it did everyone else in a ten-mile radius of the eruption, not that it mattered much because for them "permanently" meant the next ten minutes or so until buried by searing lava or suffocated by choking ash--to pee.

I like the Reader’s Digest. Besides liberal doses of humour, it also had great articles - from people’s experiences to real-life dramas. The tagline pretty much sums it up - ‘Stories about life, Advice about living’. In fact, I’d recommend that you go and get it now. 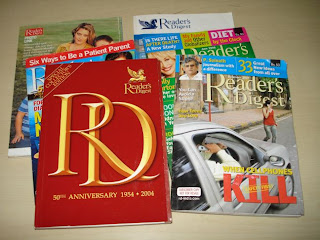 [To read the rest of the funnily terrible opening sentences, visit: http://www.sjsu.edu/depts/english/2007.htm]